Today I am going to talk about growing kiwi fruit vines. I found an Issai hardy kiwi vine at our local garden center and decided to grow 2 of them, one for each side of the garden gate arch for them to climb. I have them started in the house getting them mature enough to put them outside after the first frost.

What I like about the hardy kiwi is you can eat them right off the vine. You don’t need to peel them, there is no fuss like the traditional kiwi’s. The hardy kiwi is about the size of a large grape. I think will be a great addition to the garden area. The mini kiwis are now being sold in the produce section of the grocery stores.

This exotic species is very promising given the horticultural advantages it has over kiwifruit, also known as kiwi berry, hardy kiwi, baby kiwi or mini kiwi. This vine has a high frost hardiness (down to −30 °C in midwinter) and relatively short vegetation period. This capacity for the kiwi berry to grow in a shorter growing season in colder climates makes it an alternative to the warmer climate kiwifruits of New Zealand, potentially allowing it to become the first Actinidia to be commercially cultivated in colder north European countries. 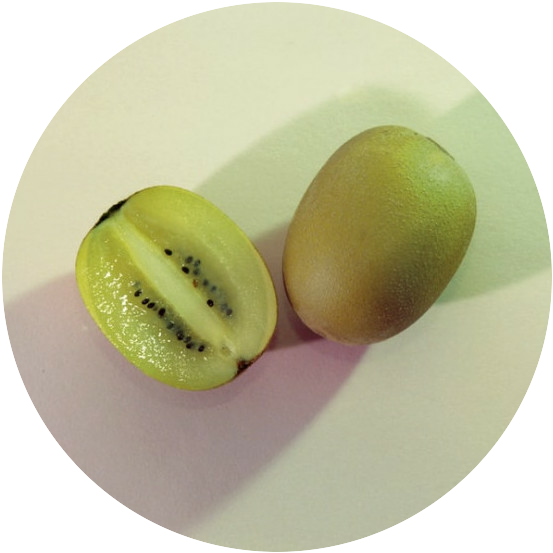 The hardy kiwi has been researched in some countries since the middle of the twentieth century, but its commercial production is relatively new and began on a small scale in the US and some European countries in the 1980s and 1990s. Currently the hardy kiwi is commercially cultivated in several countries including the US, Chile, New Zealand, Australia, China and most European countries, like, France, Belgium, Italy, the Netherlands, Switzerland, Austria, Poland and Germany.

The hardy Kiwi is high in antioxidants and have the following vitamins and minerals.

The hardy kiwi contain cartenoids, foods high in carotenoids have been linked to reducing the risk of cancer, heart disease, macular degeneration and cataracts. 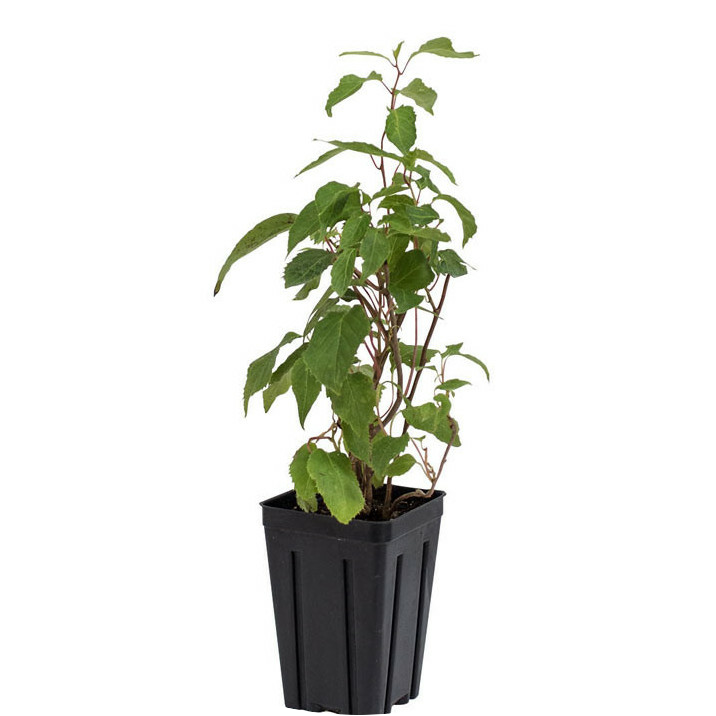 Flavonoids have high levels in the hardy kiwi due to the edible skin.

The hardy kiwi is a good source of fiber both soluble and insoluble. This taste treat contains no cholesterol and practically no fat, only approximately 1 gram from the tiny black seeds.

A great advantage of the hardy kiwi or kiwi berry (over kiwifruit) is its delicate, edible grape-like skin, which contains up to 15 times more antioxidants than the fruit pulp.

How to Grow Kiwi Fruit Vines

One of the great things about Issai Kiwi is they are self -fruiting which means you only need one plant to produce fruit. These fruits are juicy and flavorful, just like the fuzzy variety. The nice thing about these kiwi fruits is you don’t have to peel them to eat them. You can eat them right from the vine. This vine requires less pruning because of it’s early fruiting and spur type growth.

When choosing a spot for the hardy kiwi, find a place where it will get full sun. The vine will do fine in just about any type of soil but thrives best in 5.5 to 7.0 pH, make sure the soil is well drained. Have a trellis, pergola or fence for it to climb on. 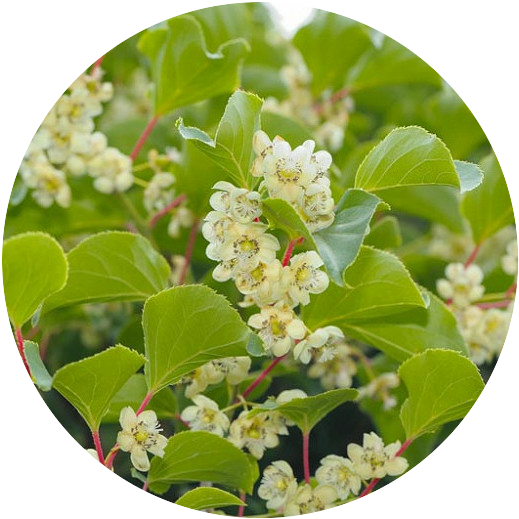 Dig a hole large enough to cover all the roots without bending or circling.

Set the plant in place so the crown (part of the plant where the roots meet the stem) is about 1-2″ below the soil surface.

Cover with soil to the original soil surface and water thoroughly. Use organic matter when planting.

How to care for the Hardy Kiwi

Do not fertilize the hardy kiwi in the first year. In the spring of the second year sprinkle 2 ounces of 10-10-10 around each plant and increase fertilizer by 2 ounces per year but do not exceed 8 ounces. 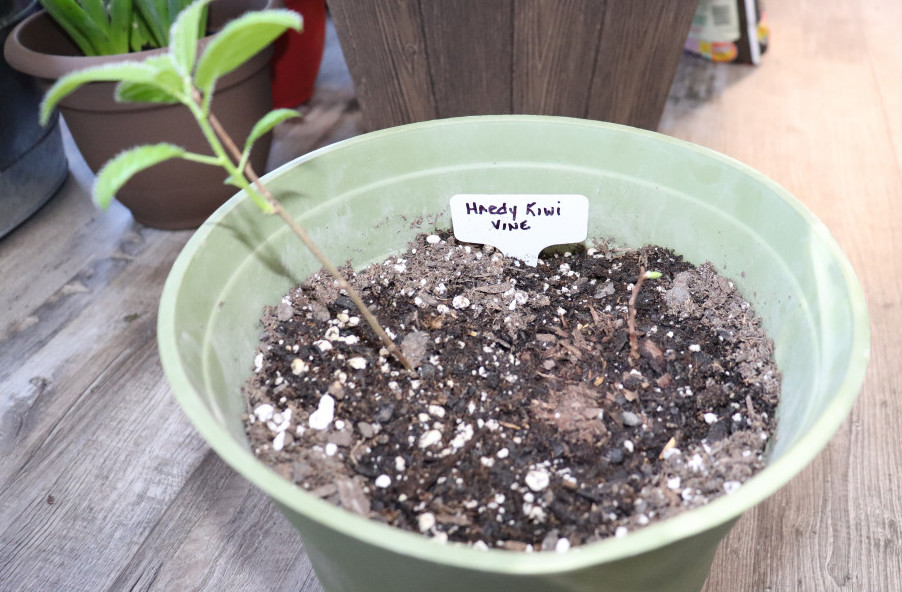 The hardy kiwi takes about 3 years to bear fruit but the Issai often bears fruit after the first year after planting. Starting in late August, pick a few fruits and let them ripen on a windowsill or in a paper bag. Taste them when the flesh is soft and the seeds are black. If they don’t ripen, wait several weeks and then test a few more fruits. 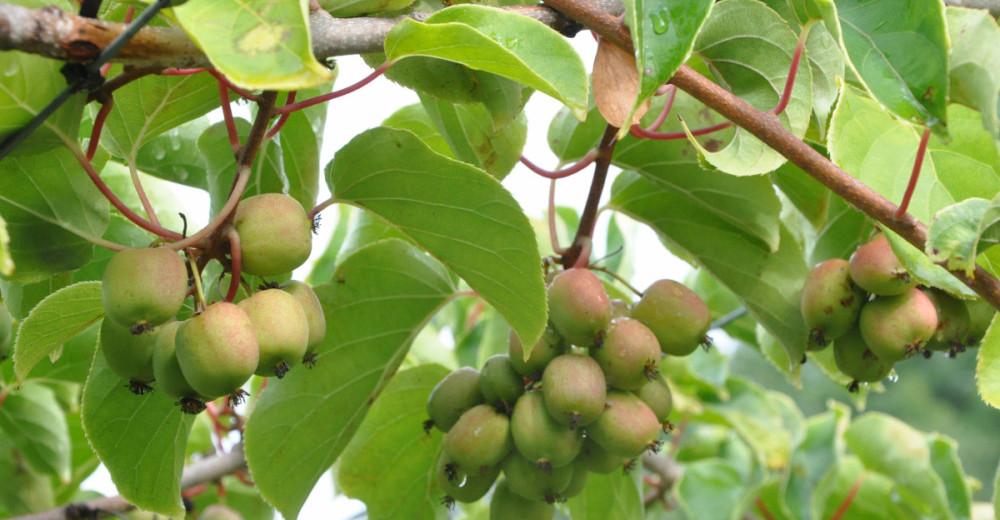 When you notice the first fruit softening on the vine, pick all the fruit. Store hard-ripe fruit in airtight plastic containers or sealed bags in the refrigerator. Take out a couple at a time to ripen. Eventually, all the fruit on the vine will  get soft, but if you wait that long, you will have a large harvest of hardy kiwi’s that will last only a short time.  No matter when you decide to harvest, be sure to remove all the fruit before the first frost.

From the research I did, it seems the hardy kiwi is better then then the original kiwi fruit, mostly because you don’t need to peel it and can eat it from the vine when it’s ripe.  What is really nice is that it’s hardy and can be grown in zones 5 and 6.  It seems pretty easy growing kiwi fruit vines.

Most research I found was zone 6 but the Issai showed it can be grown in zone 5.  I am excited to see how these grow, I have never grown them before.  These should look awesome on my new garden gates with arch to grow on.

I hope you found this post informative and helpful.  Do you have any hardy kiwi’s growing in any of your gardens?

Please leave a comment below, I would love to hear from you!